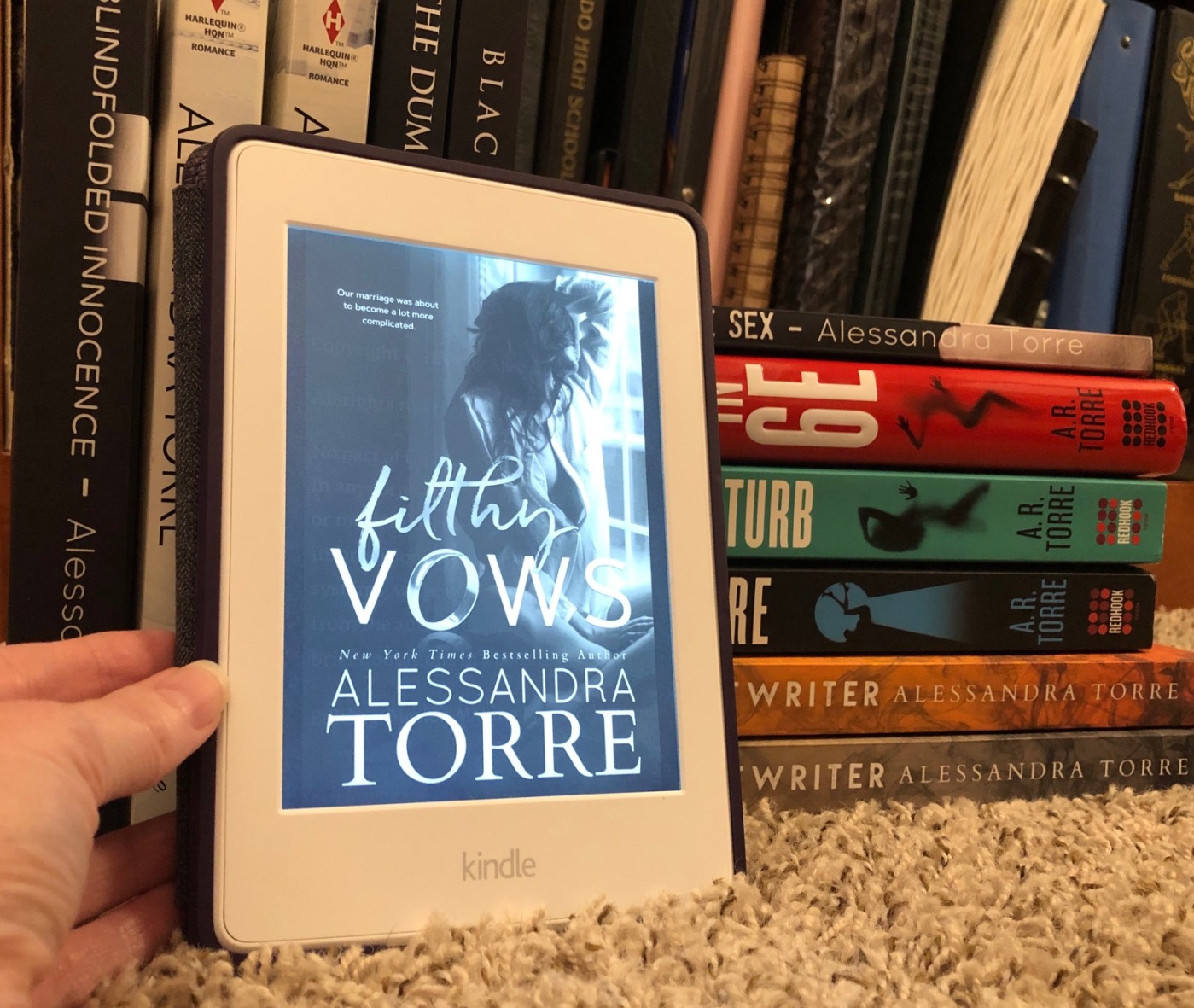 You know that emoji with the big eyes and closed mouth? The one that epitomizes HOLY SHIT? That was my expression after finishing Alessandra Torre’s Filthy Vows. As soon as I put the book down, I texted Matt nine of those faces because one just wasn’t enough. I am stuck in a state of shock and awe. Awe because THE BOOK WAS AWESOME. And shock because I wasn’t entirely prepared for the ending. I mean, I had big hopes for it. I certainly wanted that bang, but, well, HOLY SHIT.

Filthy Vows is the story of a *stable* married couple who dabble in exploring various fantasies they have. From the prologue you discover that something happens as a result of communicating their desires, but it barely scratches the surface of this book’s level of hotness. For those of you who watch the show Hot Ones (if you haven’t, go to YouTube NOW), let me put it to you this way: the book takes you through all 10 sauces with the final pages being The Last Dab. One swab of sauce isn’t enough, and lucky for us, more is coming down the pipeline. (THANK YOU, ALESSANDRA!) Once you get a taste of Elle, Easton, and Aaron, you’ll be wanting more.

Ahem! Speaking of wanting, let’s talk about fantasies. We all have them about people other than our significant others. Mine are mostly literary: Hayes Campbell, Donavon Kincaid, Embry Moore. Anyway, the point is, fantasizing is normal, expected even. But to act on those fantasies? To share those fantasies? There’s something a little risqué about that.

Some of you might be thinking a book about fantasies isn’t your cup of tea, and that’s okay! This was definitely a guilty pleasure, not Moby Dick. But I’ve found that every once in a while my brain needs a break from all the angst and turmoil and drama. It wants a seven-layer escape cake. And this book is exactly that, with a shit ton of creamy frosting on top. (Can you tell I’m hungry?)

I think this is what makes Alessandra a master wordsmith. She grounds the illicit, allowing us to experience characters’ decisions right along with them. She makes the unexpected palatable, the taboo acceptable. With her enticing works, she wants to rile us up, yes, but she also wants us to think, to believe. Her characters have depth, her dialogue is authentic, her storylines take unseen turns. She has talent in spades, which is made even more evident by the simple question that Filthy Vows encapsulates: What would you do if you knew your partner’s fantasies?

I encourage you and your significant other to do what Matt and I did: read this book together. It’s HOT, yes, but it’ll stimulate you in other ways too.

For those of you that recommended this book for us to read, I know who you are and I will get you back. I’m looking at you, Amy Vox Libris! (Insert wide-eyed emoji Erica mentioned above.) And you others know who you are!

I mean, holy crap. This book was unlike anything else I have read. We devoured Alessandra Torre’s The Girl in 6E series, as well as The Ghostwriter, so I am familiar with Ms. Torre’s work. Even for Christmas a couple years back, Santa got me Just the Sex by Ms. Torre. So there were some preconceived notions and biases about what a book titled Filthy Vows would be about. But dayummm…this book took it to an entirely new level. Details, details, details! It’s like having an amazing author rewrite the Penthouse letters we used to read in high school then fold that into a unique plot.

The story really has its moments. Decisions to be made. Impacts to relatable characters. And damn, a whole lotta sex. Not just sex for sex sake. But good sex. Make-me-blush sex. I-have-to-go-to-church-now sex. Is this what most New Adult Contemporary Romance books are like? I feel like, up till now, I may have only stuck my toes in the vast pool of this genre. But now I have been baptized.

I read a good chunk of this book on the flight home from Book Bonanza this past Sunday. Once again, thank goodness for Kindles. I was blushing hard, and I have no idea what I would have said if someone had asked what I was reading.

Here is what I find truly interesting: the relationship between the two male leads. They have no romance between them, but as they make decisions on how to move forward, there are real-life feelings associated with them. The men don’t sound like “We have cock, we bang now.” They actually discuss ramifications and impacts. I can’t say I have a male friend that I would feel THAT close with, but I like to think we would have similar conversations. I can’t speak for the female lead, but from what I’ve read before, her inner dialogue seems well thought out.

In a previous review, Erica said that I often don’t make decisions on whether I like a book until I am getting to the end. I just like to see how things are going to be wrapped up before I reach a conclusion. In Filthy Vows, however, I knew pretty early on that I was going to like this one. It wasn’t just the sexy sexiness so much as the relationships between the characters. I enjoy books that analyze decision-making—thrillers, suspense, and apparently romances like this.

Finally, Erica mentioned that you should read this with your spouse. I could not agree more. But if you do, you need to go into it without feeling defensive. Let this book create a communication channel where you can share your desires with each other. Give and take. Happy reading!

As a final thought, I do wonder how much “research” Ms. Torre did in preparation for this book…

So nosy! Leave Alessandra and Joe out of it, Matt!

He does make an interesting point though: there is no sex for sex sake. The sex moves the story forward, which I hate to say is not always the case in romances. I mean, don’t get me wrong—I love a good sex scene, but sometimes it feels gratuitous. Not in this book! The sex is almost like another character; it’s that important.

I feel like we’ve said sex a lot in this review. sex. Sex. SEx. SEX! Okay, I’ll be an adult now. Go grab your partner and a bottle of rosé and read this book! It’s the greatest SEXcape I’ve had in a long time.

To purchase a copy of or read the synopsis for Alessandra Torre’s Filthy Vows, click here.