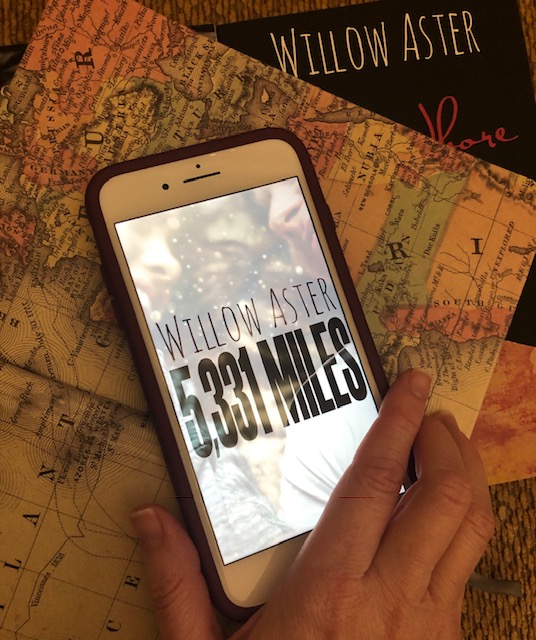 I feel like I’ve read some over-the-top angsty reads lately. You know the ones—they cause stress and emotional freak-outs, even hair loss! Some of my favorite books are these kinds of reads; however, I’ve found that sometimes I crave something different. Sometimes I want something that’s kinder to my heart…and my digestive system. (Ha!) So when I read Willow’s 5,331 Miles, I felt immediately at ease. This is not a tumultuous romance, friends. Rarely did I bite off my nails or want to strangle Matt for being a member of the opposite sex. Rather, I swooned and was hypnotized by a very sweet, tender story.

5,331 Miles is a friends-to-lovers tale that revolves around two characters: Mirabelle and Jaxson. The book spans twelve years, and in that time, we see character growth and maturity, as well as a variety of relatable conflicts. The entire time I read it, I found myself hooked. And when I wasn’t reading it, I wished I were. The story truly kept me engaged from start to finish. It also made me reflect on some of the choices I’d made in my younger years. For a good portion of the book, Mira and Jaxson are in high school. Remember that time? Does it make you cringe just thinking about it, or is that just me? Willow handles that time period with grace and realism. I really appreciated her honest take on it. At this point in the book, I got to see the beginning of Mira’s growth and found myself propelling my hands in the air and chanting, “Amen, sister!”

I’m not sure how Matt will react to this book as it’s definitely one for the ladies and not as blush-inducing (which might be a good thing as far as he’s concerned!), but I thoroughly enjoyed this story.

Wait a second, there are books that make you want to strangle me for being of the opposite sex? What the hell?

I think I know that look, now that I think about it. I always thought it was just gas. (muahahhaha…kidding)

And no blushing? Au contraire! I read most of this book during a lengthy airport delay and flight home from Texas this last weekend for work. I seem to remember being on the plane, sitting next to a woman with nosy eyes, reading words and phrases like “thrust inside me,” “endowed,” and “pulsed around him.” I swear she saw what I was reading because I heard her giggle. Luckily for me, it was nighttime and the cabin lights were all off. So yes, there is sex. And yes, there was blushing. But I owned that shit. #Progress

I hated high school. Not because I was bullied or messed with, but because I really didn’t blossom into who I am today until college and beyond. I always look back on high school as a “I had to do it” phase. So the parts where Jaxson is one of the cool kids were hard to relate to. But his thoughts, emotions, and reactions all felt very sincere as he got older. I could relate, and while I may not be as much like Jaxson in real life, I know and knew people like him. People who wear their feelings on their sleeve as they get older. He’s likeable and realistic, even at his worst.

I like Mirabelle, too. I like that I got to see her grow, the way Erica mentioned above. I also like that she had honest and sincere reactions. Although, dang. Once again, seeing how a woman’s mind works is becoming more and more eye-opening. I am starting to feel like more guys need to read these books. Not to do a blog with their wives, but to better understand how women think because shoot… So. Many. Thoughts. At. One. Time. No wonder it’s hard to get an answer to “What do you want for dinner?”

There is a villain in the book too—Heather. Damn, I hate that bitch. She made my blood boil. For an author to write a character that can evoke such a strong emotion just goes to show how well written this story is. But, for real. I fucking hate her.

I also really like how this book is written from one perspective, but with dual timelines. In some books like that, I can get confused. It bounces around too much, or the characters aren’t different enough to remember which timeline I am reading. This is not the case with 5,331 Miles. The use of dual timelines isn’t a novelty but a tool that propels the story forward.

Overall, it was a fun book to read. It had the YA angst I have read before, with some foo-foo romance that normally isn’t my go-to, but I liked it. Also, ever since I started it, I’ve had The Proclaimer’s “When I Wake Up (500 Miles)” song in my head. Not because it has anything to do with this book but because it was the first thing to come to mind when I saw the title. “I would walk 500 miles and I would walk 500 more. Just to be the man who’d walk a thousand miles to fall down at your door.” (You’re welcome.)

Matt, on behalf of everyone reading this, YOU SUCK. Thanks for putting that song in our heads. Just for that, I will make you read “foo-foo romances” for the rest of this year.

I agree with him, though, the dual timelines were impressive. Speaking from an editing perspective, I know how easy it is for authors to get tripped up on this, but Willow handles it with ease. Each time period was clear and intentionally (and appropriately!) placed.

It’s funny—Matt focuses a lot on Heather in his review, but now that it’s been a few weeks since I’ve read the book, I can honestly say Mira is who stands out to me. You know that saying, “I am woman. Hear me roar”? That’s Mira. She is curvy and flawed and different and capable and STRONG. I love reading about fierce female characters, and Willow nails it with Mira.

I hope this story brings Willow a new, bigger reader base because she is an author to read, an author to be appreciated, and an author to be praised. Having only read Willow and Tarryn’s End of Men series before this, I am excited to read more from her!

To purchase a copy of or read the synopsis for Willow Aster’s 5,331 Miles, click here.